Suppose you’re looking for a location with live music, DJ, and a dance floor entertainment package. Make sure to read the dress code for each nightclub to have the most incredible experience; otherwise, you risk being turned away. With a district-by-district guide, we’ve provided you with all you need to know about experiencing the nightlife and will show you where the most incredible spots are to go out with friends or a significant other. The list includes everything from warmly inviting nightclubs to unforgettable special occasions like boat parties and night tours. We are here to take you on tour of Barcelona Nightlife.

You might think it lacks the vibrancy of places like London or New York, but the fact that Barcelona is the second-largest city in Spain gives you a good incentive to explore its entertainment options. Without a doubt, there will be enough to accomplish once the sun has gone to bed. 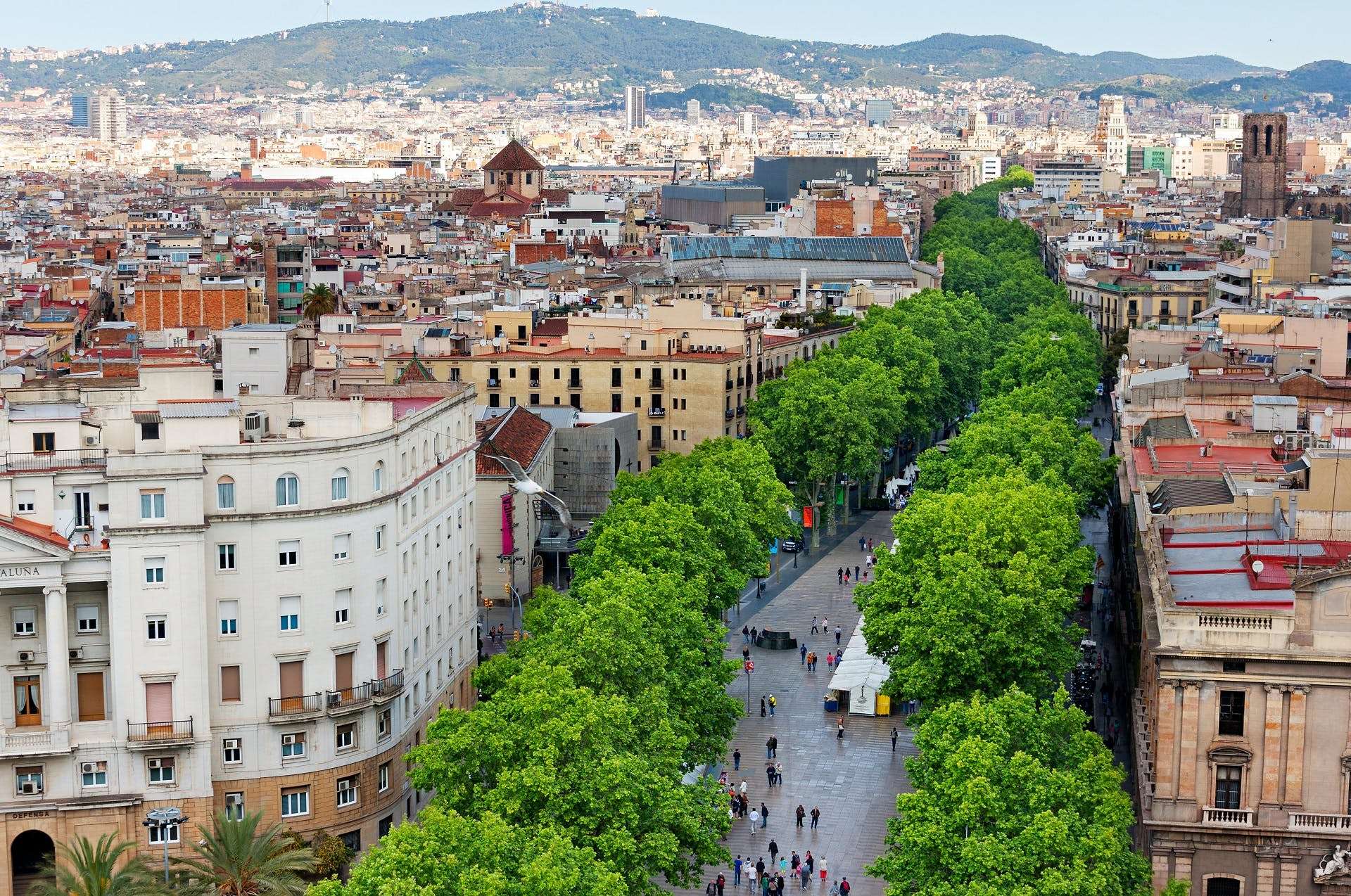 If you’re a beginner, you’ll probably begin in Las Ramblas, where you’ll find little alleys reminiscent of a medieval old town. It is regarded as the busiest location during the day, and when dusk falls, the streets will be packed with people watching performers perform. At that time, tourists will begin going to pubs and clubs for supper and drinks.

The name La Rambla, often spelled Las Ramblas, comes from the Arabic term Ramla, which means sandy riverbed. The majestic promenade began as a little dried-up watercourse outside the walls of the Gothic Quarter.

The street is most frequently referred to as “Las Ramblas” because it consists of several streets that run from Plaça Catalunya’s Rambla de Canaletes, through the Rambla dels Estudis, Rambla de les Flors, Rambla dels Caputxins, and Rambla de Santa Monica, to the recently built Rambla del Mar, which connects the boulevard to the Maremagnum shopping center on the Port Vell. Rambla del Raval and Nou de la Rambla are two other Ramblas in Barcelona. However, they are entirely different streets!

Las Ramblas divides the two most central neighborhoods of Barcelona’s old town, the touristy Gothic Quarter on one side and the shabby chic neighborhood of El Raval on the other, just as it connects the city center and the sea. 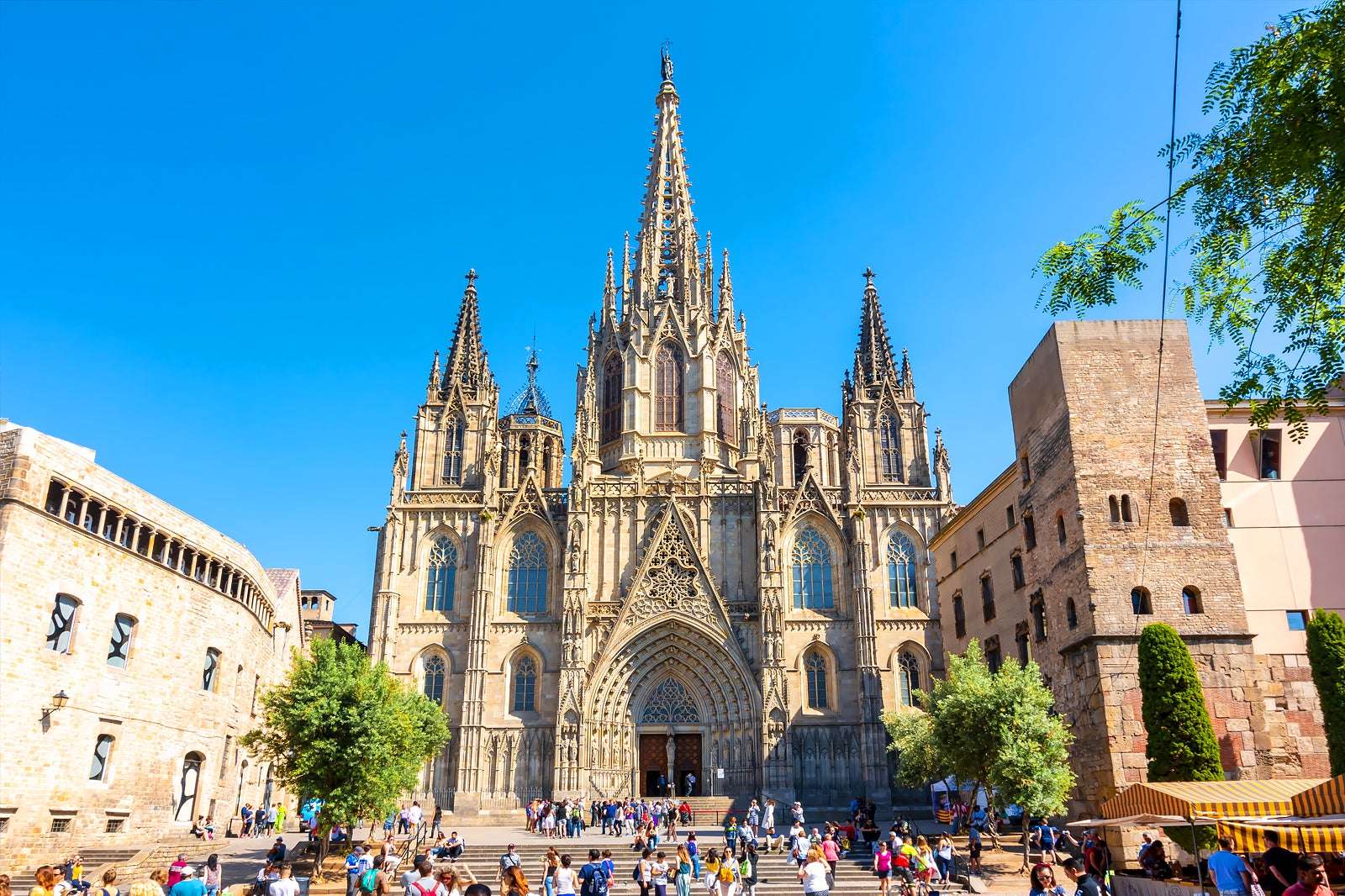 With a history of more than 2,000 years and a charming atmosphere, Barcelona’s Gothic Quarter is one of the city’s most well-known areas.

That inevitably means many things to do and even more sights to see in this busy area! However, no matter how long you look, you will always find another charming plaza or enigmatic alleyway. For terrific insider advice on some must-see locations nearby, see our choices for things to do in Barcelona’s Gothic Quarter. But remember to provide extra time in case you get lost!

Barcelona’s Barri Gotic neighborhood perfectly retains the long-past ambiance. Nearly every architectural element in this ancient district is preserved in the Middle Ages, creating a charming, traffic-free environment. Tiny pedestrian streets display the wear on their smoothed-down cobblestones, but imposing Gothic structures with stunning facades have withstood the test of time.

Typically, Las Ramblas is seen as a gateway to Barcelona’s more upbeat side of the city’s nightlife. The Gothic Quarter is worth visiting if you want to experience the authentic local nightlife venues. There is a chic Milk bar that serves fantastic drinks as a starter. There are also British and Irish bars like Flaherty’s Irish Pub, where you can play beer pong with other visitors on Thursday or take advantage of the ladies night on Friday.

In the vicinity, there is a flamenco show that could serve as an exciting way to start your night out. Look into Plaza Real, where you may locate renowned nightclubs like Sidecar, Jamboree, etc. 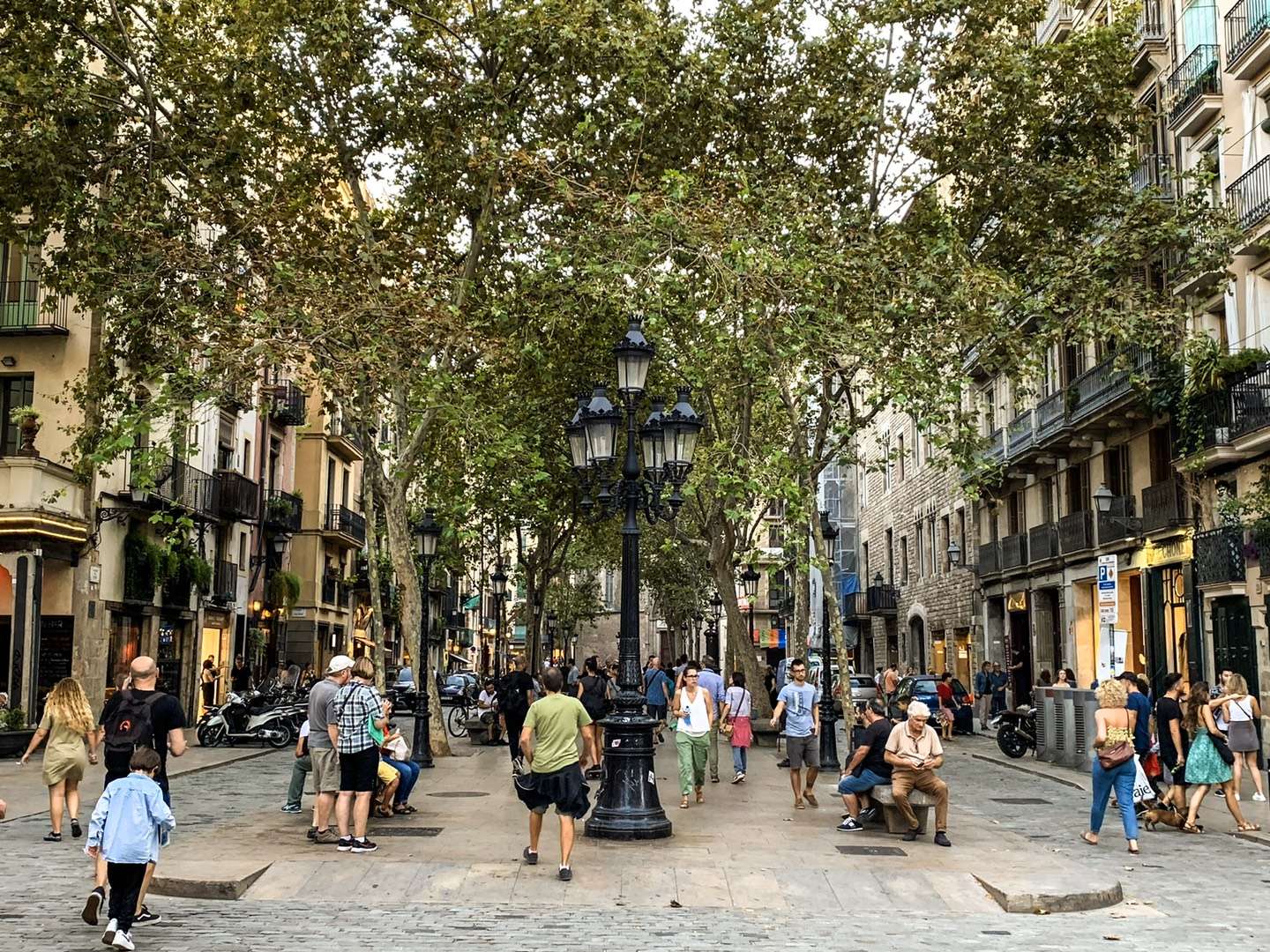 You must go to El Born if you’re seeking a more upscale location to enjoy the nightlife. Cafés, pubs, and several stylish clothing options surround you. One such location is Miramelindo, where you can enjoy various drinks, but the cava cocktail is the house’s specialty. In addition, you’ll discover hidden gems like Cat Bar if you explore the backstreets further.

Sometimes you need help finding the finest croissant in the world in the never-ending search for life. If you go to La Pastelera Hofmann, you very likely may. It is a local landmark, yet it cannot be easy to find amid El Born’s maze of narrow lanes. They are known for their stuffed croissants, which come in various flavors, from traditional ones like marzipan or mascarpone to fruity ones like mango and raspberry. They are a bakery and patisserie. The show’s star is the delightfully flaky, buttery croissants, but you’ll be enticed by everything! Farmhouse-style kitchen cabinets that to the ceiling, rustic wooden tables stacked high with delicious goodies, and the aroma of freshly baked goods. 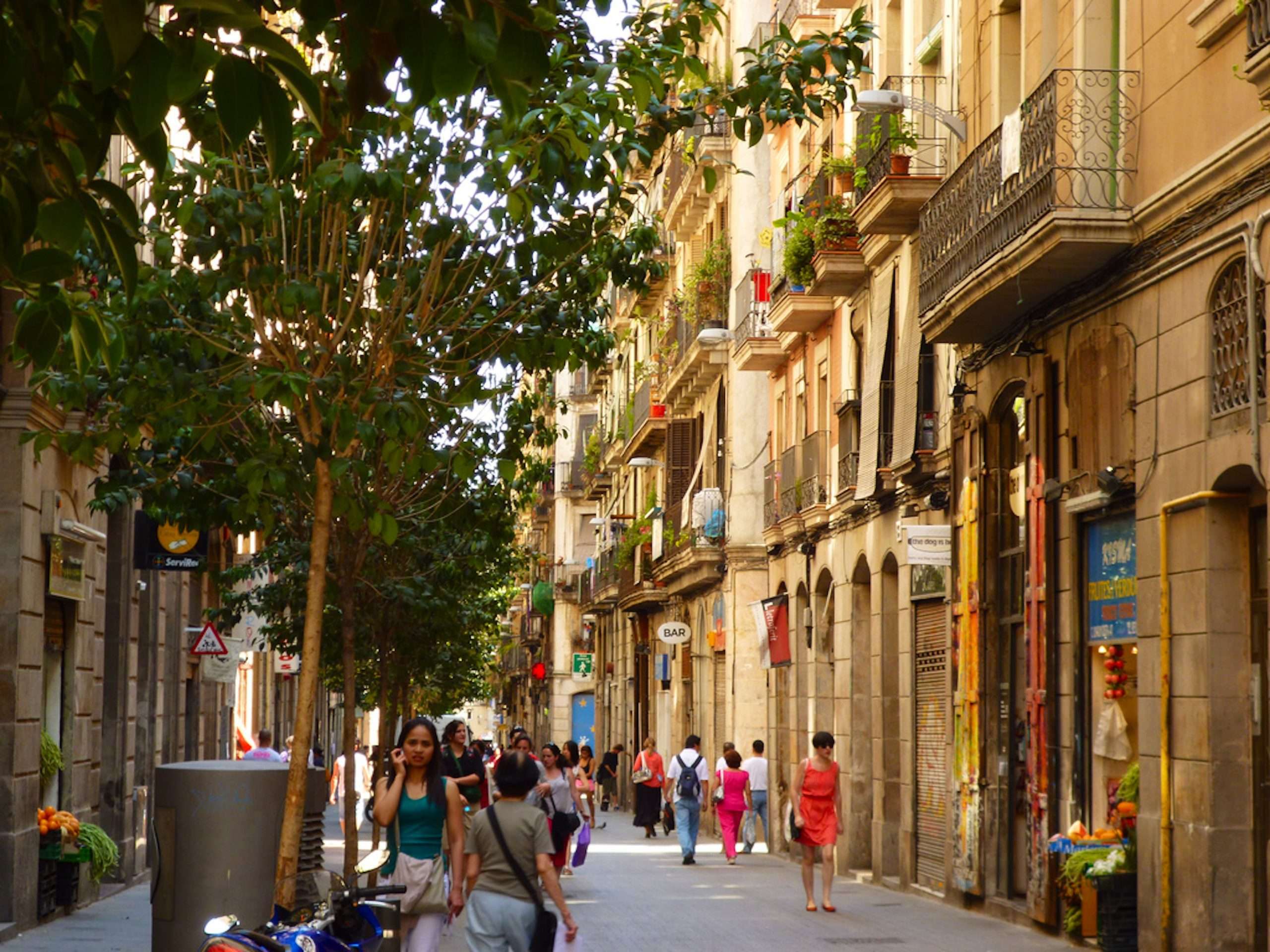 On the other side of the Las Ramblas, where many children play football or cricket, lies Raval. In the center of this neighborhood are trendy pubs like Ambar, which is constantly crowded with young people, adorable couples, and lost souls. A cocktail bar nearby called Marmalade is famed for its Pornstart Martini, where you may attempt some flirting with a glitzier audience.

Les Enfants (a Spanish disco), Moog, and other clubs may be found in Nou de la Rambia.
Sala Apolo and Moog (real electronic music/DJs) (a small venue with Stereophonics and midweek parties like Nasty Mondays). Visit Shenanigans Irish Pub for beers and live music (usually on Friday and Saturday) for a more laid-back experience.

Visit Bar Marsella, situated at the bottom of Rambla del Raval, if you want to get a real sense of the city. Famous artists like Picasso and Ernest Hemingway enjoyed this historic pub, especially for its absinthe. Pictures clearly show that the tavern still has a remarkably similar appearance to when it initially opened in 1820. It also gets excellent ratings! It’s okay if you decide that this bar is not for you. In this area of the city, it is popular to go bar hopping, so venture out and see what other drinking establishments catch your eye.

It’s wise to stay at a Sant Jordi hostel in Barcelona. Several alternatives are available; they are all excellent lodgings at reasonable prices. The Rock Palace hostel in Barcelona is your best bet if El Raval appeals to you. It is regarded as one of the most fantastic hostels in Barcelona and is contemporary, cozy, and conveniently situated. 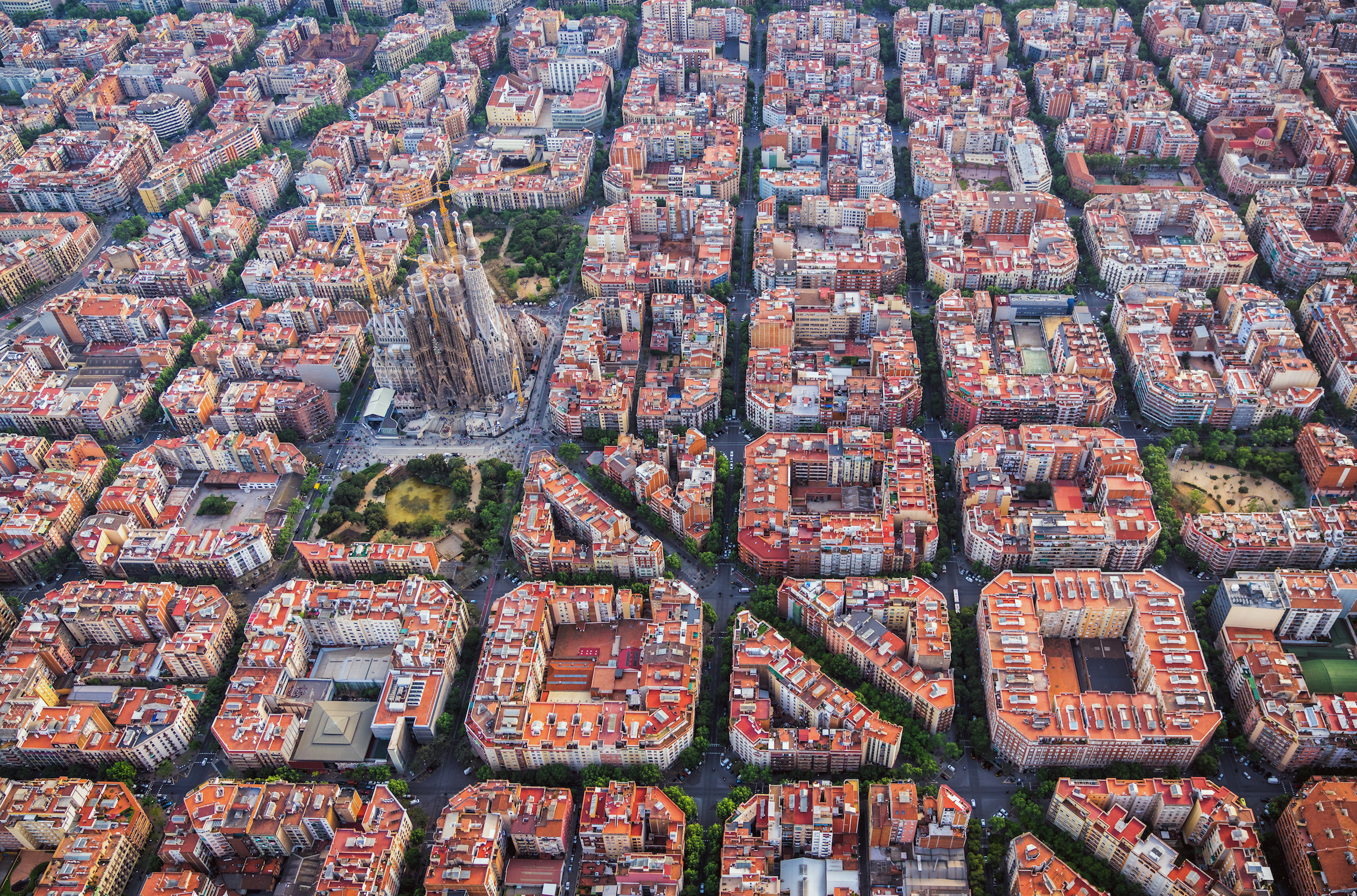 The Eixample, which translates to “Expansion,” is the outcome of Idelfons Cerdà’s urban planning. The large region is organized according to a grid layout that Cerdà used in the middle of the 1800s to maximize natural lighting and sanitary conditions while bringing efficiency and livability to the population. The neighborhoods of Fort Pienc, Sagrada Famlia, the Dreta de l’Eixample, the Antiga Esquerra de l’Eixample, the Nova Esquerra de l’Eixample, and Sant Antoni make up the Eixample area today. Although there are remnants of the avant-garde from GATCPAC in the 1930s and contemporary architecture from the 1950s, the Eixample is a Modernista display.

To get ready for the night, tap on CocoVail Beer Hall. This pub is an older, more established location featuring an American-style boozer. If you travel diagonally, the audience often gets better and more sophisticated. To have an exciting cocktail with a beautiful crowd, head to Slow Barcelona for the most excellent vodka tonics. In and around this neighborhood, be prepared to dress a little brighter. In the Arc de Triomf neighborhood, Firebug is a well-known pub and restaurant with delicious cuisine selections and a mouthwatering breakfast.

Due to its hip bars, chic restaurants, and nightclubs like Metro, the neighborhood around Casanova Street is today known as Gayxample.