England’s capital, London, is a historic place. There are many nightlife options and clubs and bars all across London. The city is a significant global center for nightlife. At night, a lot of people will be out on the streets. People from all over the country and the world will be in these cities. It is a tourist-friendly city with excellent hotels, restaurants, bars, pubs, and nightclubs. You may use this guide to learn about London’s best nightlife, pubs, and clubs. First, let’s start our conversation with London’s renowned nightlife areas. So how about checking out our list of the top hip-hop clubs in London to get your delicious A$AP Rocky and Biggie Smalls fix?

Hip-hop fans in London are fortunate for choice since several of the city’s most popular venues regularly stage events to honor the music. Therefore, these are the clubs and events you need to be aware of, whether it’s a night specializing in the newest radio smashes, a deep dive into the golden age, or even the chance to step behind the mic.

The brunch craze that took over London is back and stronger than ever. Hip Hop Brunch will get you dirty with a Dirty South foods menu and endless cocktails before spitting lines and busting moves on the dance floor. Hip Hop Brunch is revolutionizing everything we know about alcoholic brunches in London.

Let us now look at the top Hip Hop Clubs in London. 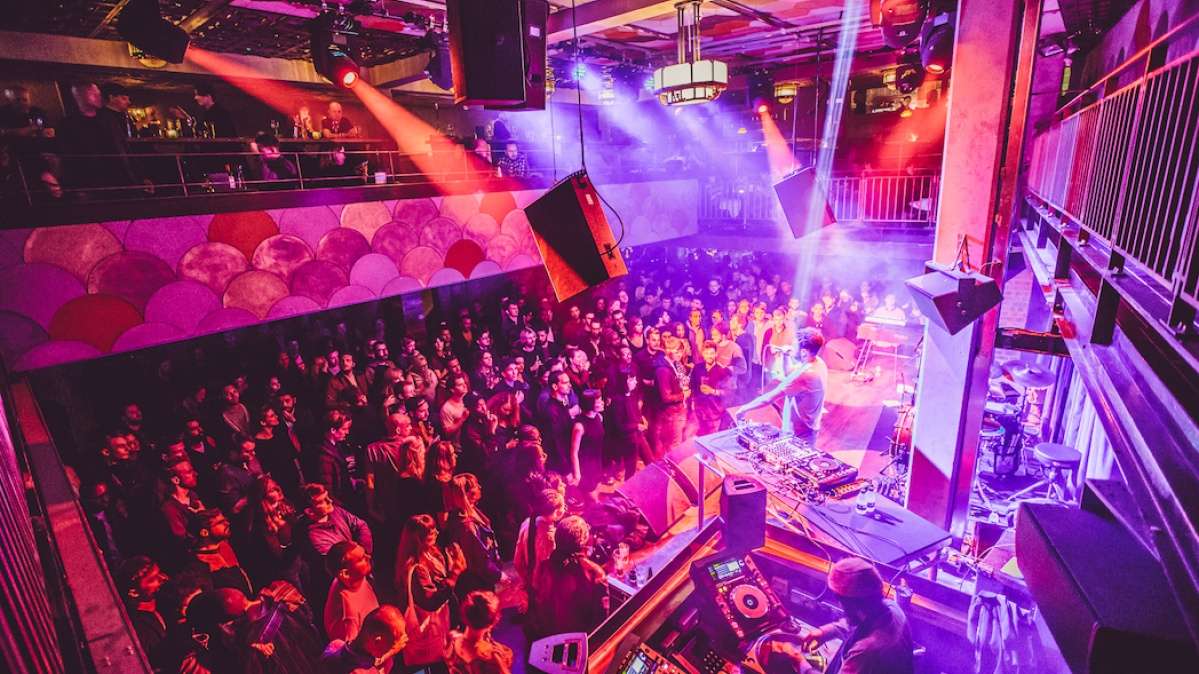 This Camden club hosts a wide range of performances, from avant-garde jazz to ear-splitting rock, but it is well known for hosting top-notch, enjoyable hip-hop evenings. In the past, it has produced symphonic interpretations of J Dilla albums, hosted live performances by rap icons like Kool G Rap, and held several DJ events featuring hip-hop music. Regular club nights constantly emerge and depart, so it’s wise to keep an eye on the website to ensure that any upcoming announcements are noticed.

The Jazz Cafe has been open for thirty years as of this year. The legendary Camden music venue has hosted performances by artists including D’Angelo, Amy Winehouse, Adele, Roy Ayers, and Bobby Womack. However, it is now the newest company to disclose that the effects of the previous few months put it at risk of closing.

It has disclosed on a crowdfunding platform, like many London nightlife businesses, that since being forced to close its doors in March, it has not received government aid or rent relief from its landlord. 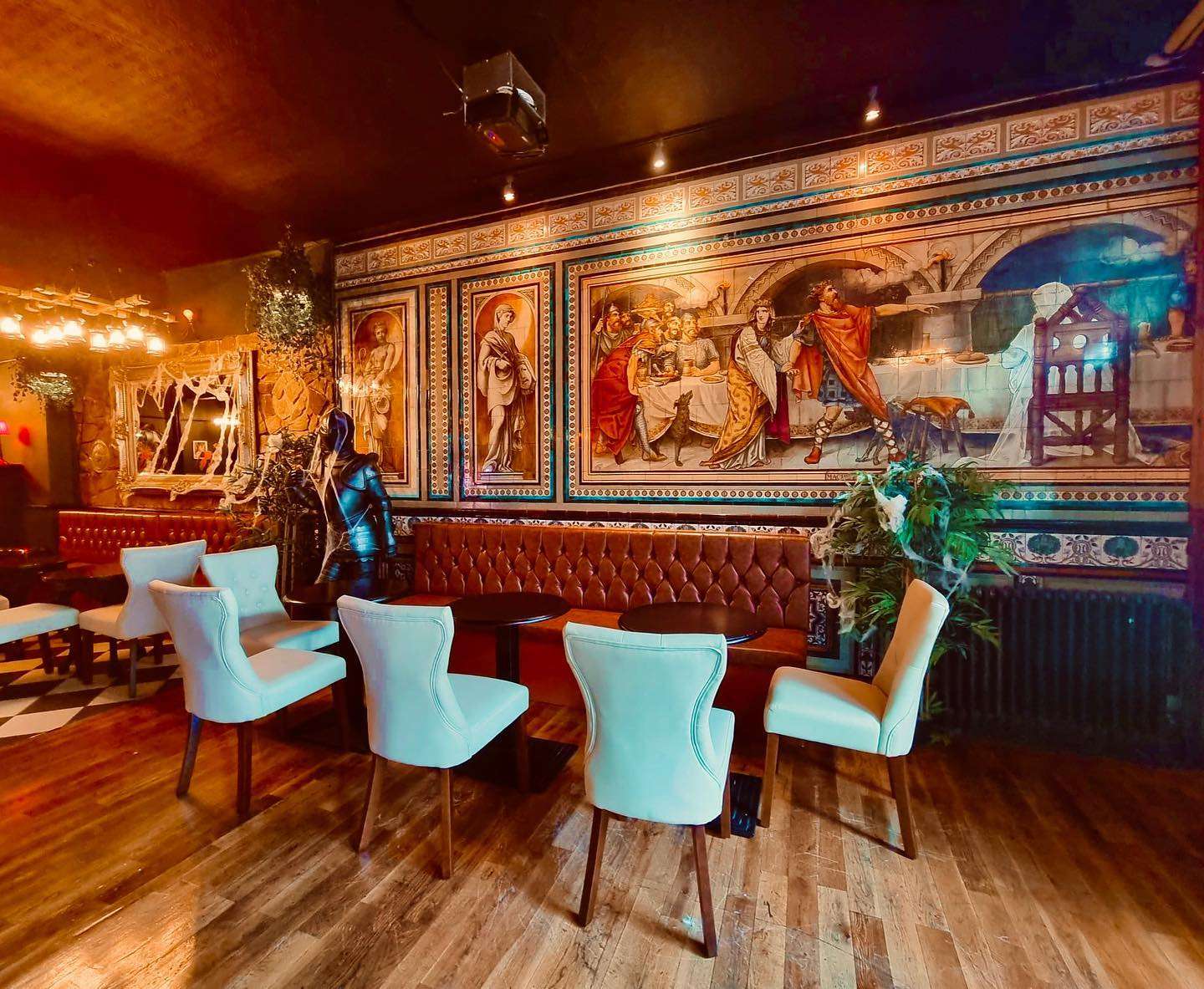 Macbeth is a big, aging bar. A roof patio is present. And a decent audio system. Supporting the best up-and-coming artists and hosting some of the greatest bands in the world. Evenings that range from magnificent to excellent! The Macbeth has several club nights and lives music performances, but at its core, it remains a traditional bar.
The venue, which is located on Hoxton Square and includes a roof terrace, has once again become one of the greatest in the neighborhood but hasn’t forgotten its roots as an old-fashioned boozer.

The Macbeth has a strong musical history, with David Rodigan, Johnny Marr, and The XX among the acts who have performed on its tiny stage. In addition, to live music, it has some rather exciting club nights. It frequently hosts hip-hop events that appeal to a wide range of preferences, presenting music from the golden age of hip-hop in the 1990s through Migos and Nicki Minaj. On Friday and Saturday evenings, everything happens.

The Macbeth is a sizable, rundown bar in Hoxton. There is a roof terrace currently. And a decent audio system. Presenting some of the most prominent artists on the planet while promoting some of the best emerging performers in the UK and worldwide. Evenings that range from stunning to magnificent. Amazing bartenders, first-rate security, and affordable beverages! 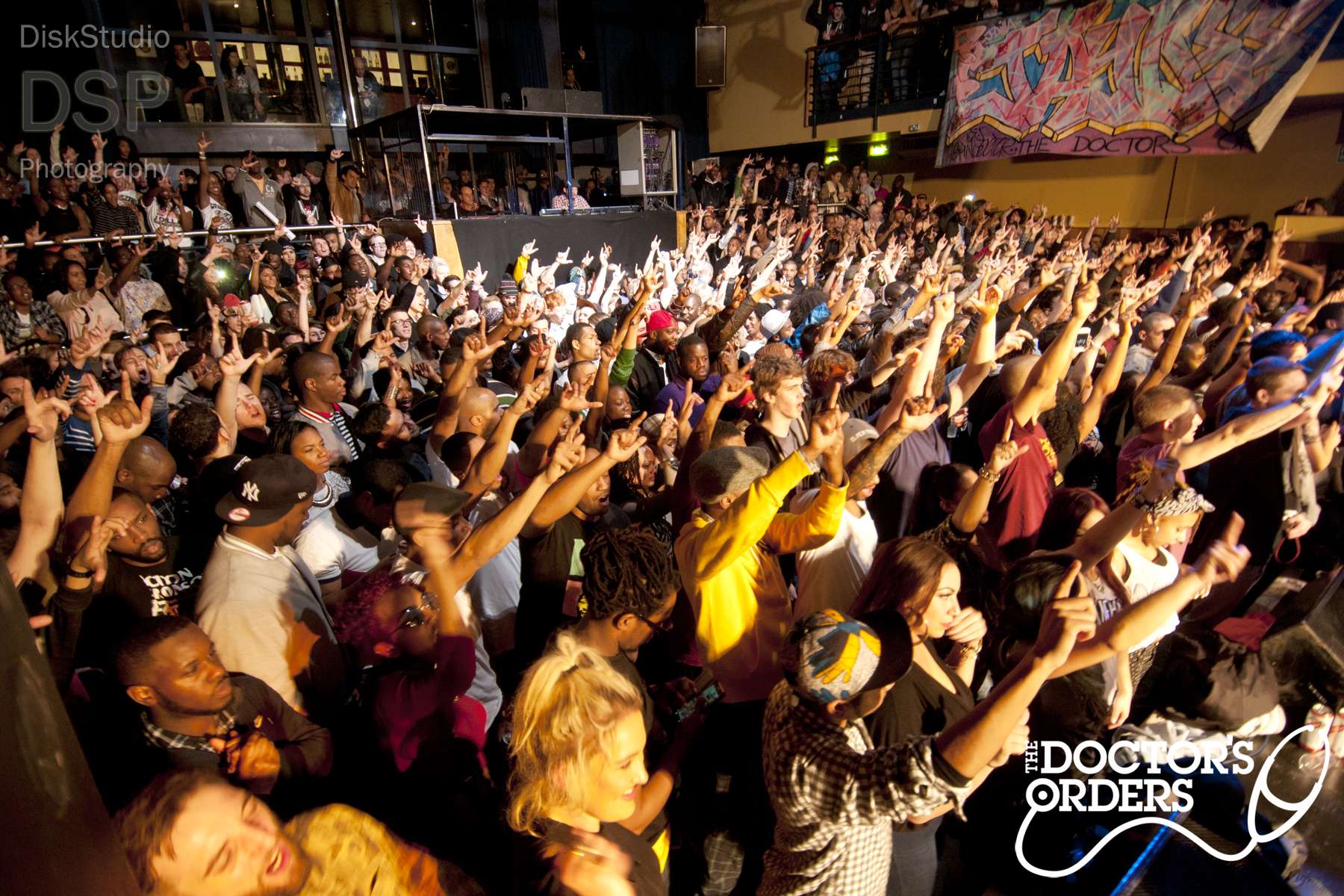 The Doctor’s Orders have been hosting events in the city for more than ten years and frequently attract legendary DJs to play for them (? Questlove, De La Soul, and DJ Premier are just a few of the luminaries they’ve hosted). They host parties at locations all across the city, from Brixton Jamm to Shoreditch’s Trapeze, and they excel at hosting multi-genre nights, including R’n’B, dancehall, and basement wherever they see appropriate. Feeling witty? Visit one of their hip-hop bar trivia nights.

If hip-hop is your thing, you’ve undoubtedly heard of The Doctor’s Orders; for more than a decade, these men have been hosting renowned for being down-to-earth parties all over the UK. Their concerts are entirely focused on the music, so if you care more about your shirt’s wrinkles than the DJ, this isn’t the event for you. To get two tickets for the price of one, choose a friend if you are all about the rhythm. Good moves for dancing are not offered.

With this party, they are going 100% hip-hop, getting down to the bare essentials of what this music and culture are all about.

You can expect to hear only the best MCs, from Travis Scott to Nas, Wu-Tang to Post Malone, ranging from brand-new hotness to your favorite oldies. But this December night will get hot with an exceptional trio of the nation’s top DJs. One of the best turntablists in the world, DJ Matman has lit up events like Red Bull Three style and others. 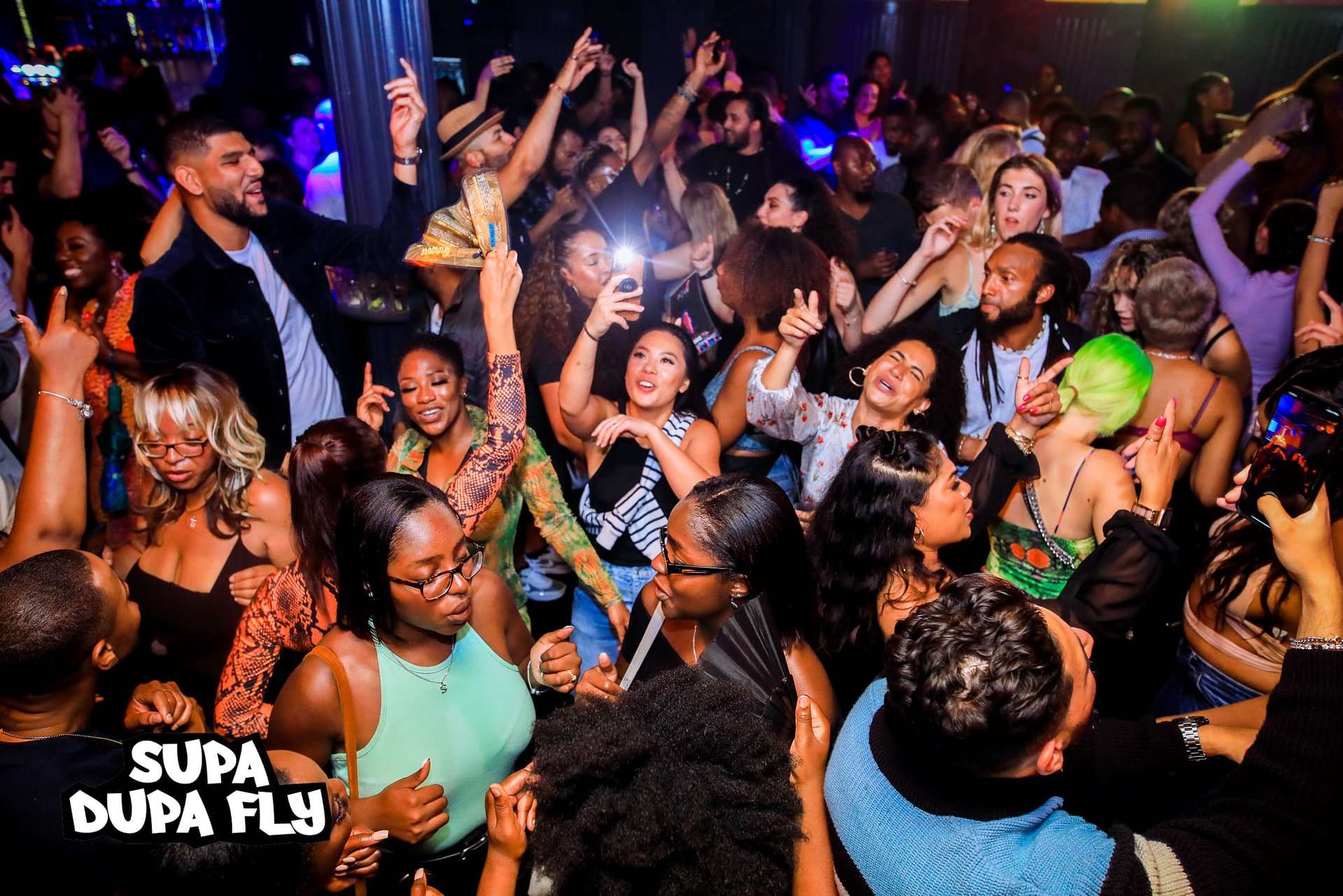 The Supa Dupa Fly hip-hop night is one of the most well-known in London. Hosting events mainly in south and east London, each party has a theme. On one night, the DJ might only play music from the past, but on another, Drake’s entire might be on the playlist. They frequently venture into R&B as well. Get a ticket to one of their rooftop parties for some summertime entertainment.

Previously known as Hoxton Square Bar & Kitchen, the long-running hip hop and R&B night have a Friday night engagement at Colours Hoxton. On the first Friday of each month, Emily Rawson’s all-female DJ collective “Rock The Belles x Hiphop Hype” plays music, and on the second Friday of each month, the theme is “Everything R&B,” so you can expect to hear everyone from TLC to MJB.

One of Queen of Hoxton’s legendary hip hop karaoke nights is a must-visit for anyone who believes they can keep up with Andre 3000’s extremely rapid flow on Ms. Jackson or who thinks they know every word to Biggie Smalls’ song Juicy. The best-known open mic hip hop event in London is hosted by DJ Rob Pursey of Southern Hospitality, who conduct famous parties around the capital. Anyone taking the stage should be well-prepared since the audience will quickly tell them if they lose their rhythm.

This is your chance to fulfill all of your rap fantasies in front of London’s most devoted audience, whether you want to go vintage with some Biggie, Missy, or The Fugees or keep it current with Drake, Kendrick Lamar, or Kanye. All those years of rapping along in bars, cars, or in front of mirrors have led to this moment when there are hundreds of rap tunes to pick from!

Come to the Queen Of Hoxton, the UK’s Original Hip Hop Karaoke’s monthly home in London, for one of the city’s most storied events!

Hip Hop Karaoke has become an actual “bucket list” experience over the years, and thousands of amateurs and a few celebrities have performed on stage with DJ Rob Pursey, Host Bobby Champagne Jr., and the rest of the Hip Hop Karaoke family at both their London and national residencies and all major UK festivals.

It will be delightful to shout out “99 Problems” to a braying audience in the Tate Modern because your previous experiences with art institutions likely involved stern-faced staff members instructing you to keep your voice down. The Hip Hop Karaoke (HHK) crew, DJ Rob Pursey, and emcee Bobby Champagne Jr. will be in charge of the party, and Fourpure Brewery will provide the beer.

One of London’s top clubs, XOYO frequently draws foreign DJs to its booth to spin music. It’s open six days a week and plays everything from techno to funk, but Thursday is the night to go if you want to hear some banging hip-hop. The humorously called Your Mum’s House formerly operated out of the Dalston bar The Nest but has now relocated there, taking its rowdy hip-hop atmosphere with it. As a result, you can anticipate upbeat songs, R&B, bass music, and more.

This weekly outing is a “dress up ‘n’ get messed up” night of mayhem and mischief, not for the faint of heart, with a soundtrack of bassy house, hip hop, old school bangers, trap, R&B, UK garage, and pretty much anything with a bassline nasty enough to make your mom blush.

Every Thursday, the XOYO basement is taken over by the East London party group YOUR MUM’S HOUSE!

YMH is a night of mayhem and mischief with a Hip-Hop, R&B, bass, futuristic sounds, and party bangers soundtrack that is not for the faint of heart.

It is a clubbing experience for the younger generation with a fast-paced home party feel; although it may be your mother’s house, nobody is acting nicely!

Thanks to a booking decision that overlooked genre and only prioritized quality, this outstanding Shoreditch venue soon established itself as one of the most on-point partying spaces and concert venues in London after opening in 2010. Every weekend, hundreds of London’s trendiest revelers and partygoers converge on XOYO to see the newest DJs, producers, bands, and singer-songwriters performing on the club’s two floors.